To share your memory on the wall of Theresa Anderson, sign in using one of the following options:

If you were to list the adjectives which could be used to describe Theresa, passionate, funny, dedicated and thoughtful would top that list.... Read More
Theresa L. Anderson, age 54 of Kentwood, passed away unexpectedly on Wednesday, April 10, 2019.

If you were to list the adjectives which could be used to describe Theresa, passionate, funny, dedicated and thoughtful would top that list.

She was a lifelong animal lover and was passionate about caring for not only her pets, but animals of all kinds.
Theresa was also funny and had a great sense of humor and often her pranks involved a whoopie cushion and silly string.
Theresa was dedicated, a trait which started at an early age. In high school, she dedicated herself to be the best she could be, as a result she set the high school track record for the one-mile race, a record she held for many years. She also dedicated herself to basketball and played not only in high school, but on the college level as well. After school, Theresa dedicated 30 years to Sam’s Club where she worked.

Theresa was also thoughtful and would demonstrate that time and time again with her hand written thank you cards; cards which she would send for the smallest and simplest of reasons.

Theresa’s presence will be deeply missed by her entire family, but her memory and the memories of the times they spent together will be with them forever.

A celebration of Theresa’s life is being held on Sunday, April 14, 2019 from 1-4 PM at the Simpson Family Funeral Home in Sheridan (246 S. Main Street). Please feel free to come and go during that time as your schedule allows.

In lieu of flowers the family asks you direct memorial donations in Theresa’s memory to any of the following charities: Mental Health Foundation of West Michigan; CM Community Foundation Brady Sexton Endowment or Third Coast Lab Rescue. Envelopes will be available at the funeral home on Sunday.
Read Less

To send flowers to the family or plant a tree in memory of Theresa Lynn Anderson, please visit our Heartfelt Sympathies Store.

Receive notifications about information and event scheduling for Theresa

You will receive any future notification messages.
Print

We encourage you to share your most beloved memories of Theresa here, so that the family and other loved ones can always see it. You can upload cherished photographs, or share your favorite stories, and can even comment on those shared by others.

Posted Apr 14, 2019 at 07:29am
My condolences to all of Theresa's family and friends. Her absence will be felt in a our lives. Her memories will live on in our hearts. Her spirit will inspire our futures. Theresa was my childhood friend. We grew up together; so many memories flood my mind. When I saw her last summer we reminisced of sleep overs and adventures on the farm. To say I will miss Theresa is an understatement. Peace be with us all. In sympathy, Bridget Allison (Caputo)
Comment Share
Share via:

Posted Apr 12, 2019 at 08:26pm
Theresa will be missed and never forgotten. She was such a terrific friend to me. I always felt we were kindred spirits. Below (I hope) are some pictures of some of the adventures Theresa and I had together. One is of us snow shoeing in Provin Trails and the other is of us kayaking down the Grand River. I always had the best time with her!

To all of her family, please know her light will continue to shine in my heart. Please accept my deepest condolences for your loss.

Posted Apr 12, 2019 at 01:15pm
Thinking of you and wishing you all peace and comfort in this difficult time. We will be praying for Theresa and all who miss her.

Posted Apr 12, 2019 at 11:39am
My deepest sympathy to the family of Theresa Lynn Anderson. When we lose a loved ones in death it is never easy. During this difficult time may your family find comfort in God’s word the Bible that soon we will see our loved ones again (John 5:28,29). Jehovah God promises that soon death will be no more (Revelation 21:4).
Comment Share
Share via:
DK 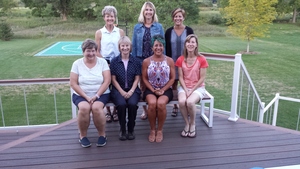