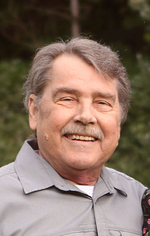 Russell L. Shirey, age 74 of Hubbardston, passed away on Wednesday, June 3, 2020 at Sparrow Hospital in Lansing.

Russ retired in 1999 from General Motors after working there for 34 years. After his retirement, Russ loved going fishing or more specifically, he liked catching the fish and then letting them go so he could catch them again. While Russ did like to be outdoors, he did not like being in the sun and preferred the cool shade. He enjoyed maintaining his reflecting and frog pond. Russ liked playing cards and was a big movie buff. However, most of all, Russ loved his family and spending as much time as he could with his kids and grandkids.

A celebration of Russ’s life is being planned for a later date. Russ will be laid to rest in the Westside Cemetery in Hubbardston.