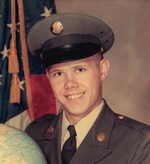 Russell proudly served his country as a member of the United States Army. He enjoyed going to dirt track races, playing pool, and spending time with his family. He also loved animals, watching the game show network, and playing horseshoes.

Graveside services for Russell will be held on Saturday, July 25, 2020 beginning at 1 PM at Evergreen Township Cemetery.

For those wanting to make a memorial donation the family suggests you direct them to the Wounded Warriors Foundation in Russell’s memory.