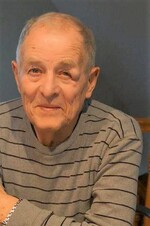 Ronald Sherd, 87, of rural Sheridan, passed away on March 29, 2021 at home surrounded by his loving family.

Ron was born at home on November 28, 1933 in Bushnell Township, the son of Leslie and Mildred (Hoyt) Sherd. He was a proud veteran of the United States Airforce having served during the Korean war. Ron was a life member of VFW post 5065 in Sheridan. On January 18, 1980 in Belding, Ron married Mary Jensen and together they have enjoyed over 41 years of wedded bliss! Throughout their marriage Ron and Mary have enjoyed traveling all over the United States and beyond. They enjoyed motorcycle riding, wintering out west with friends and being with family. Ron retired from General Motors after 30 years and then went to work driving school bus, he loved the time he spent driving bus, until his retirement for health reasons. He was a good mechanic and was always up to the task of fixing cars and enjoyed tinkering. Ron and Mary have attended Fenwick United Methodist Church for many years and he will be greatly missed by all who knew him.

A private family graveside service will be held at a later date with Pastor Larry Nalett officiating. Memorial contributions in memory of Ron may be directed towards the Sheridan VFW Post 5065 or Sparrow Home Hospice.