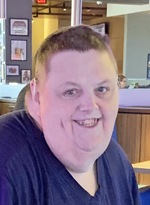 Michael E. Hansen, age 51, of Grand Rapids, passed away peacefully on Saturday, February 27, 2021, at the Laurels of Kent under the loving care of his family and Faith Hospice.

Mike had a certain way about him which made you laugh, smile, and glad to be around him. He was a member of the Central Montcalm High School class of 1987. Mike was very talented in the kitchen and enjoyed baking bread, cinnamon rolls, and cooking his families famous Hansen Hot Beef, which is a 4th generation recipe. Mike loved his cat, Domino, and spending time with his family. He had a great sense of humor, something he kept until the very end. Mike will be deeply missed by everyone who knew him.

Mike was preceded in death by his parents, Edwin & Charlene (Packard) Hansen and an infant sister, Pamela Sue.
Graveside services for Mike will be held later this year at the Evergreen Township Cemetery.

For those wanting to make a memorial donation in Mike’s memory the family suggest you direct them to the National Kidney Foundation.