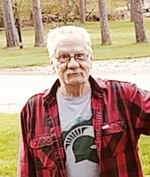 Michael J. Davidson, age 70, of Stanton, passed away on Monday, September 21, 2020 at Medilodge of Wyoming.

Mike proudly served his country during Vietnam as a member of the United States Army, 11th Armored Cavalry Regiment, 3rd Squadron, L Troop, 2nd Platoon and was also a member of the Stanton American Legion. He was an avid outdoorsman who loved hunting and fishing. In high school, Mike was a standout 4 sport athlete for the Portland Red Raiders and is best remembered for the football game where he carried the ball only 5 times, with each carry resulting in a touchdown. Mike’s love of sports continued into adulthood where he really liked watching the Detroit Lions, Michigan State University teams and Detroit Tigers baseball; however, his favorite sporting events to watch were the ones his grandkids played in. Mike absolutely loved being a dad and grandpa and was always their number one fan. He also liked working in his yard which is a passion passed down to him from his mother.

A celebration of Mike’s life is being held outside at the Simpson Family Funeral Homes in Stanton (225 W. Cedar St) on Sunday, September 27, 2020, from 2 to 4 PM. Please feel free to come and go as your schedule allows. Military honors will be given at 4 PM at the funeral home.

In honoring Mike’s wishes please dress casually and feel free to come as you are.