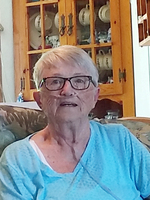 Janis M. Baldwin, age 83 of Carson City, passed away on Tuesday, July 28, 2020.
Jan was a person who was always thinking of others and looking to help someone out whenever she could. She loved to craft and was always gifting the things she made to people. Jan also loved tending to her garden and flowers. She retired from the Montcalm County Jail where she was a cook. Jan also cooked for Lonnie’s Drive-In in Crystal, Potterville Public Schools, the State of Michigan at the State Secondary Complex, and was an office assistant at TG&Y Stores.

Jan was preceded in death by her parents, Warren & Bessie (Favorite) Griswold; son, Ronnie Baldwin and her husband, Tom Baldwin.

A celebration of Jan’s life is being planned for a later date. Jan will be laid to rest next to her husband at Crystal Cemetery.