To share your memory on the wall of Janet Staines, sign in using one of the following options:

Print
Janet Staines, age 85 of Fenwick, passed away on Friday, June 26, 2020, at her home under the loving care of her family and hospice.

Janet was a proud and determined woman and when she had made a decision and her mind was set there was n... Read More
Janet Staines, age 85 of Fenwick, passed away on Friday, June 26, 2020, at her home under the loving care of her family and hospice.

Janet was a proud and determined woman and when she had made a decision and her mind was set there was no going back, you only moved forward. Growing up Janet was very talented and gifted musically and while she was able to play multiple instruments by ear her absolute favorite was the accordion. She was a member of three different bands throughout her lifetime. Janet was also a fantastic baker; her dinner rolls and cinnamon rolls were melt-in-your-mouth good and her pies and crusts were out of this world. Having been born and raised in Detroit, Janet was also a diehard Tigers fan and may at times have been known to share her thoughts and opinions of the game with the players, managers, and umps through the TV and radio. She also loved to bowl, tend to her garden, and was a caregiver for many years to her daughter, DeAnna and her in-laws. Janet was a member of Shiloh Community Church.

Janet was preceded in death by her parents, Anthony & Julia (Hilsky) Smelik; husband, Ormand Staines and their daughter, DeAnna Staines.

Visitation and a funeral ceremony celebrating Janet’s life are being held on Wednesday, July 1, 2020 at Shiloh Community Church. Visitation will be from 10-11 AM, with the funeral ceremony beginning at 11 AM, with Pastor Ken Harger officiating. Final interment will be at Sunset Memorial Gardens in Ionia.

Due to the COVID-19 Pandemic, everyone attending the visitation and funeral will be required to wear a mask.

For those wanting to make a memorial donation in Janet’s memory the family suggests you direct them to Shiloh Community Church. Envelopes will be available at the church.
Read Less

To send flowers to the family or plant a tree in memory of Janet Staines, please visit our Heartfelt Sympathies Store.

Receive notifications about information and event scheduling for Janet Staines

We encourage you to share your most beloved memories of Janet Staines here, so that the family and other loved ones can always see it. You can upload cherished photographs, or share your favorite stories, and can even comment on those shared by others.

Posted Jun 30, 2020 at 08:38am
Bern and I would like to say that we're thinking of you all during this time. Such a hard loss for you all. I always liked Janet, and we had two things in common: our name and being accordion players. Love to you all.
Comment Share
Share via:
NE

Posted Jun 28, 2020 at 05:55pm
About a hundred years ago, or so it seems, Janet made some rolls for a penny supper sponsored by the band at Central Montcalm High school. They were the best rolls I had ever tasted. She gave me her recipe and I have shared it with my children. In my recipe book, it's entitled "Janet Staines' Rolls." I also have fond memories of her and Ormand when Deanna was a junior high student at Sheridan. They were great parents and always supportive of the Sheridan staff. I was a counselor there at the time. May God's peace be with you. 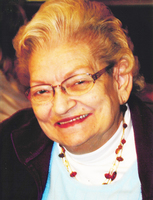