To share your memory on the wall of Gordie Howe, sign in using one of the following options:

Gordie loved going to his cabin in Barryton. He enjoyed hunting, snowmobiling, playing cards, and riding four wheelers. He proudly served his country during Vietnam as a member of the United States Army. Gordie retired from Electrolux after working there for 33 years. If anyone ever needed help you could always count on Gordie being right there to lend a hand. While he enjoyed spending time with all his family and friends, he especially loved being around his granddaughters, kids and his beloved wife, Barb.

A celebration of Gordie’s life is being planned for a later date.
Read Less

To plant a memorial tree in honor of Gordie Howe, please visit our Heartfelt Sympathies Store.

Receive notifications about information and event scheduling for Gordie

There are no events scheduled. You can still show your support by sending flowers directly to the family, or planting a memorial tree in memory of Gordie Howe.
Plant a Tree

We encourage you to share your most beloved memories of Gordie here, so that the family and other loved ones can always see it. You can upload cherished photographs, or share your favorite stories, and can even comment on those shared by others.

Posted Nov 19, 2020 at 09:11pm
From the time I can remember, when we went to Barryton the first thing we did was race down the hill to the cabin to see if Gordie was there! Gordie always had the best ideas to have fun and was happy to teach us "kids" (that were 8-10 years younger than him). Motorcycles & old cars on the dirt racetrack, a bon fire behind the cabin, snowmobiles in the U.P. and playing cards. Lots of playing cards! At weddings he ALWAYS gave sympathy cards...I still have mine. Fun was everywhere with Gordie in jokes, pranks and nicknames! He was honest, fair and giving while poking fun at his favorite people. I was blessed to know Gordie and will remember him always!
Comment Share
Share via:

You have everything down right true!! I was surprise you still had your sympathy card!!!
CR

Posted Nov 18, 2020 at 03:39pm
Our thoughts and prayers are with you all. So sorry for your loss. Love ,Stew and Janice Buskirk Hoss and Laurie Buskirk, Randy and Carrie Rogers
Comment Share
Share via:

Thank you so much!! Even though I don't see you! I still love you all!!!
TM

Thank you!! Love you both!!
RG

Posted Nov 18, 2020 at 07:16am
Gordie’s love of racing attributed to my getting involved in racing. After are first race our goal was to attend the Bristol night race. For many years after our first year at Bristol so many great memories were created and always be cherished. Every morning after a long day and night my Old Buddy would be up as soon as he smelled the coffee brewing and we would talk and reminisce about prior days until all the young boys would rise. Thank-You for all the memories over all these years. You well be so deeply missed.
Comment Share
Share via:

He loved all the memories of you and him!! Love you little brother!!!
LR

Posted Nov 18, 2020 at 05:47am
Sending hugs and prayers for strength at the difficult time
Gordie was a giving man, genuinely kind man. So many memories that will never leave us. He was a kidder,who loved to pick on everyone to make them laugh ! One memory fresh to thought is on the pontoon near the cabin our motor stopped-well Mr Howe didn’t carry paddles on his pontoon so waved quite a few boaters past saying we don’t need help, well... I had a bit of a panic attack in which he joked about continually after he fixed the motor as I continued to remind him the need for paddles! He was always trying to teach our kids while they were little to wave the California Howdy (middle finger) to each car as we were out yard saling up near the cabin-such a stinker but always In good fun. Too many memories to write but they will always be with us and our family.
Playing cards....let me just say...again he was a stinker who loved not only to play but beat you good and rub it in!
Rest In Peace Old Man- Thank you God for lending him to us all of these years❤️
Love, Ry Guy and Mrs.Rush

Very will written!!! Love ya 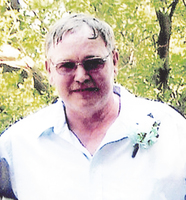 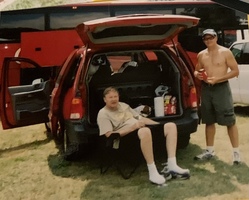 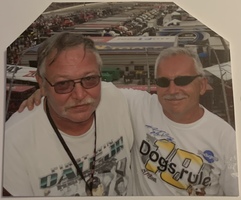