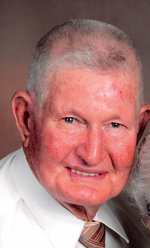 Dooder was born in Stanton on June 14, 1932. His mother died when he was two years old. He later had a step-mother. Dooder had a difficult life, lacking many of the necessities of life - enough food, clothing or clean home, but also love and support. He did have plenty of discipline, often not warranted. School was very hard for Dooder, but he never missed a day. If he wanted to see a movie, he had to mow grass or shovel snow to get the money. In high school, sports kept him going. He was very good in basketball and football. His basketball team went to state and football team to district. He helped make cement blocks to earn the money to buy a '32 Chevy, like the one he now has.

After graduation, he was drafted into the army and served a year in Korea lifting 200-pound shells. This job was very hard on his ears and nerves which gave him empathy for his grandson, Kellen, who served a year in Afghanistan.

Soon after being discharged, he was hired at Ionia Mfg. building cars, and worked there for ten years until Stuart Basom persuaded him to come to work at his car dealership. After being there about nine years, he was offered a job being head custodian at Stanton Elementary School, where he tried to keep everything spotless. He sustained a serious eye injury and he and we felt it was time to leave the school. However, he continued working, taking care of the Huntington Bank and doing yard work for many elderly town people.

Also, after leaving the army, he met his Greenville gal who was attending County Normal in Stanton to be a rural school teacher. Our first date was a hotdog roast with his brother and sister and their dates and the six went to a drive-in movie all in one car. Ten months we were married, the same month Sharon began teaching. That was in 1955.

In 1957, we began building our house on Brown Road, and continued with more rooms, garages and a pond stocked with bluegills for several years. Dooder spent many hours putting in a beautiful yard and planting many shrubs. The kids often said he owned half of the Miracle-Gro company, because he used so much. Besides lovingly caring for his yard, he also kept his cars cleaned and polished.

In 1958, our first child, Jeri. was born, Kim in 1961, and Penny in 1965. Sharon was a stay-at-home mother but took classes toward her degree in the evenings. Daddy had diaper duty. Dooder coached little league before and during the time Kim played. Kim played some football, ran track and played basketball in high school. Dooder always watched nervously. He was proud that Kim became such a good basketball player. The girls enjoyed watching but never cared to play.

When the kids were growing up, we spent many vacations camping mostly at School Section Lake and a few longer trips. Our first trailer was a small aluminum one with no bathrooms and we had many good times in that. Our next trailer was a bigger one. Beautiful, all knotty pine with bathrooms. Our one and only trip was to Niagara Falls and on to Cedar Point, we got lost in Buffalo and each person who gave us directions told us differently. We pulled that big freightliner through the same toll booth three times; eventually we arrived in Cedar Point where it rained - straight through the roof. No wonder the previous owners had kept it in the barn. When we returned home, we traded it for a new trailer. After the kids left home, we bought a slightly nicer, bigger one, bought a lot at Pleasure Point near Six Lakes, added a Florida room and spent many weekends there. The children and later grandchildren especially enjoyed the pool and playground. We sold that the same year we sold our home on Brown Road.

Our children graduated from high school and all had some further schooling. All are hardworking (and have beautiful lawns and shiny cars like their dad.) Then along came six grandchildren, each special in their own way. We have wonderful memories of fun times, especially birthdays and holidays. They too grew up and we now have seven loving great-grandchildren.

We are so fortunate that all our children and grandchildren have never been seriously ill (except Kim having meningitis as a baby), been in any serious trouble or on drugs. All the grandchildren have had some schooling since high school and have good jobs or are stay-at-home moms.

Dooder has always been a big fan of the Detroit Tigers and watching or listening to every game. He attended the first night game in Briggs Stadium at age 16. After our retirement, we spent about 12 years going to Florida, each winter for a couple of months, and spent many days in Lakeland watching the Tigers and meeting many of the players, visiting. Besides the Tigers, he also enjoys the Lions and Pistons.

Also, after retirement, we enjoyed many bus trips all over the United States and Canada. We have seen a lot of beautiful country and met many wonderful people on the buses. He says his favorite trip was to the Canadian Rockies. Flying to Hawaii twice, Dooder was lucky enough to receive the complimentary bottles of champagne (which we still have).
In 2011, we moved to the other side of Stanton to a smaller house with less work but still with plenty of yard for Dooder to again landscape and plant and use the Miracle-Gro. Even though Dooder hated leaving the Brown Road house, we continue to have all the memories. Now we are making new ones.

Dooder enjoys attending church and rarely misses a Sunday. He considers these people as his second family.

Dooder wants to be remembered as a good person, a friend and a hard worker.

A celebration of Dooder’s life is being planned for a later date.

For those wishing to make a memorial donation in Dooder’s memory the family suggests you direct them to either the Stanton First Congregational Church or Heritage Village.