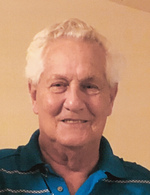 Gene L. Byers, age 82, of Stanton, passed away at the home of his daughter on Monday, March 08, 2021, under the loving care of his family and Spectrum Hospice.

Gene was a lifelong resident of the Sheridan and Stanton area. He graduated from Sheridan High School. Gene worked for Big L Lumber for many years and then as a painter for Parker Painting and Insulating. In his younger days, Gene loved hunting and enjoyed the various trips he took. As he got older, Gene enjoyed golfing and working on the “chain gang” at Central Montcalm football games. However, Gene’s favorite thing to do was to spend time with his family. He could always be found in the stands or on the sidelines of his grandkid’s games and events; where he could be found actively and sometimes loudly, cheering them on and encouraging them. Gene was a wonderful dad and grandpa who will be deeply missed.

Gene was preceded in death by his parents, Bert & Hazel (Dolbee) Byers and 11 brothers and sisters.

Private family funeral services will be held at a late date. Final inurnment will be at Evergreen Cemetery.

For those wanting to make a memorial donation in Gene’s memory the family suggests you direct them to the Brady Sexton Memorial Fund, which helps support youth sports in the Central Montcalm area. Envelopes will be available at the funeral home.