To share your memory on the wall of Eugene Minikey, sign in using one of the following options:

Gene was a member of the Greenville American Legion Post 101 having proudly served his country in the United States Army. Not one to ve... Read More
Eugene “Gene” Minikey, age 75 of Sheridan, passed away at his home on Wednesday, March 20, 2019.

Gene was a member of the Greenville American Legion Post 101 having proudly served his country in the United States Army. Not one to venture to far away from home, Gene loved being outdoors, especially hunting and fishing. He loved spending time on his homemade porch swing and could be found there almost every Sunday and he also enjoyed going to the local racetracks.

Gene is preceded in death by his parents, Lyle & Norma (Caulkins) Minikey and his brother-in-law, Roger Ostrander.

Memorial donations may be made in Gene’s memory to the Greenville American Legion and envelops will be available at the funeral home.
Read Less

To send flowers to the family or plant a tree in memory of Eugene Lyle "Gene" Minikey, please visit our Heartfelt Sympathies Store.

Receive notifications about information and event scheduling for Eugene

You will receive any future notification messages.
Print

We encourage you to share your most beloved memories of Eugene here, so that the family and other loved ones can always see it. You can upload cherished photographs, or share your favorite stories, and can even comment on those shared by others. 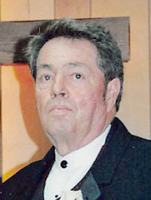