To share your memory on the wall of Ed Kimmel, sign in using one of the following options:

Print
Edmond D. Kimmel, age 91 of Crystal, passed away at his home under the loving care of his family and Sparrow Hospice.

Ed was born in Lawrenceville, Illinois and moved to Crystal, Michigan as a young child. After graduating from Crystal ... Read More
Edmond D. Kimmel, age 91 of Crystal, passed away at his home under the loving care of his family and Sparrow Hospice.

Ed was born in Lawrenceville, Illinois and moved to Crystal, Michigan as a young child. After graduating from Crystal High School he attended Ferris Institute where he earned his Bachelor of Science in Pharmacy and played basketball and baseball. Ed served in the Korean War and returned home to marry Joan and raise 3 daughters. They made their home in Crystal where he and Joan opened Kimmel’s Pharmacy. They went on to establish Kimmel’s Hallmark Card Shops in Lansing which they ran for over 20 years. Later, Ed’s love of fitness and nutrition led him to pursue his Masters Degree in Kinesiology from Michigan State University.

Ed inspired everyone around him to set new goals and challenge themselves. Whether he was training for his 20 consecutive Boston Marathons, biking across the United States and Ireland, or preparing for his next triathlon, he never gave up and he met each new challenge with a positive attitude and a smile on his face. He achieved his pilots license, became a certified scuba diver and opened a dive shop, played the violin and piano, and became a personal trainer and nutritionist. His curiosity was limitless.

Ed was always young at heart which was evident by his eagerness to join in his kids, grandkids or great grandkids latest endeavors. His last swim was at age 90 across his beloved Crystal Lake and shortly after he finished his last road race, the Crystal Run Around the Lake. He was always there for his family and friends - as a coach, and a mentor and our biggest fan.

Ed was preceded in death by his parents, Lewis and Alice (Tucker) Kimmel; grandson, Eddie Cusack and a brother, Donald Kimmel.

In honoring Ed’s wishes no formal funeral ceremony will be held.

To plant a memorial tree in honor of Ed Kimmel, please visit our Heartfelt Sympathies Store.

Receive notifications about information and event scheduling for Ed Kimmel

There are no events scheduled. You can still show your support by sending flowers directly to the family, or planting a memorial tree in memory of Ed Kimmel.
Plant a Tree

We encourage you to share your most beloved memories of Ed Kimmel here, so that the family and other loved ones can always see it. You can upload cherished photographs, or share your favorite stories, and can even comment on those shared by others.

Posted Sep 08, 2019 at 09:33pm
I am so sorry for your loss. Ed was a wonderful man, and I'll always remember him (and the rest of you) with a smile. He was my first boss, and he taught me many lessons about being a good employee and person. God bless you all. Annette Hannula Shauver
Comment Share
Share via:
JL

Posted Sep 06, 2019 at 04:24pm
I met Ed when we both worked for Rouser's Drug in downtown Lansing. We were Pharmacists supporting their nursing home business. He was a fun person to be around, and a positive influence. Later, my wife Pam, used to call on the Kimmel's at the card shop when she was a manufacturers representative for gift and paper products. We both enjoyed working with Ed and his family.

Posted Sep 05, 2019 at 09:15am
My most vivid memories of Ed are seeing him run the 5 mile stretch around Crystal Lake (Usually several times) But I also remember him as a Pharmacist and the pharmacy in Crystal. If I remember correctly Ed helped my father out in our pharmacy in St. John’s a few times. My parents (Raymond and Elma Parr) had a cottage directly across from the Crystal golf course which is where we would see him run. An interesting side note, a friend of mine who rents a cottage on Crystal Lake had a conversation with Ed this summer. Nothing but good memories of Ed.
Jim Parr - St. John’s Mi.
Comment Share
Share via: 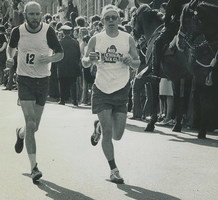