To share your memory on the wall of Dottie Linder, sign in using one of the following options:

Provide comfort for the family of Dottie Linder with a meaningful gesture of sympathy.

Print
Delores “Dottie” Linder, age 84 of Sheridan, passed away peacefully on Wednesday, February 13, 2019 at the Laurels of Fulton.

Dottie was born in Powersite, Missouri in 1934, the daughter of Earl & Beulah (Couchman) Edwards. While wor... Read More
Delores “Dottie” Linder, age 84 of Sheridan, passed away peacefully on Wednesday, February 13, 2019 at the Laurels of Fulton.

Dottie was born in Powersite, Missouri in 1934, the daughter of Earl & Beulah (Couchman) Edwards. While working as a civilian contractor for the United States Airforce, she met a young man named Neal and on May 22, 1954 they were married. What started out as a young twenty-something couple has now grown into a large family which she loved dearly.

After her marriage, Dottie became a Domestic Engineer, which was something she excelled at. She was a very opinionated woman who would get along with you just fine as long as you agreed with her opinions. She was a member of the Eastern Stars, an avid reader and student of history. She became very involved in genealogical research and really liked discovering and tracing her ancestry. Dottie was also very artistic and in her younger years she liked growing and tending to her flower garden.

Dottie was preceded in death by her parents, Earl & Beulah; her husband of 53 years Neal and a baby sister, Sharon Edwards.

Dottie’s family is tentatively planning a celebration of her life on Saturday, July 6th, which coincides with her birthday. For location details you’re asked to call Simpson Family Funeral Homes at 989-291-3611. Dottie will be laid to rest next to her husband at Vickeryville Cemetery.

For those wishing to make a memorial donation in Dottie’s memory the family suggests you direct them to either the Crystal Theater or Crystal Township Historical Society.
Read Less

To plant a memorial tree in honor of Dottie Linder, please visit our Heartfelt Sympathies Store.

Receive notifications about information and event scheduling for Dottie Linder

We encourage you to share your most beloved memories of Dottie Linder here, so that the family and other loved ones can always see it. You can upload cherished photographs, or share your favorite stories, and can even comment on those shared by others.

Posted Jul 06, 2019 at 10:51pm
We wish to send our condolence to you, Dottie's family, and assure you that you are in our prayers. Dottie was my (Brenda's) first cousin. We enjoyed visiting with her while she was in Springfield, MO. May she rest in peace
Comment Share
Share via:
K

Posted Feb 18, 2019 at 04:56am
My condolences to the family. Continue to reflect on your cherished memories together. Always remember that God cares for you and is “close to the broken-hearted.” May you call on Him in prayer for comfort and strength during this difficult time. Psalm 34: 18
Comment Share
Share via:
AA

Posted Feb 17, 2019 at 01:12am
I am sorry to hear of Ms. Dottie’s passing. I was one of her caregivers for awhile. She always called us her girls. I always enjoyed my time with her. Always a bucket of knowledge and great stories to be told. I ran across in my time hop a picture of me and her togther. And it brought back some great memories. She will. Be greatly missed 💜💜💜
Comment Share
Share via:
DL

Posted Feb 15, 2019 at 08:17am
Wendy so sorry to hear about your mom. Sending our prayers to you and your family.
Dave & Marie Linder
Comment Share
Share via:
A

Posted Feb 15, 2019 at 08:02am
So sorry for the loss of your beloved Delores. Please find comfort in the loving promise from our Heavenly Father that we can see our loved ones again right here on earth at John 5:28,29.
Comment Share
Share via: 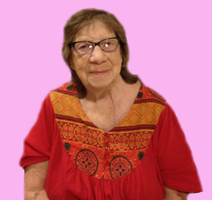