To share your memory on the wall of Christina Fike, sign in using one of the following options:

Print
Christina (Tina) Ellen Fike was born in Alma, Michigan on February 16,1944 to the late Warren G. Roberts and Bernita Ellen (Teed) Munson. On Wednesday, August 19, 2020 she entered Heaven’s Gate and in the arms of Jesus and our dad.

Tin... Read More
Christina (Tina) Ellen Fike was born in Alma, Michigan on February 16,1944 to the late Warren G. Roberts and Bernita Ellen (Teed) Munson. On Wednesday, August 19, 2020 she entered Heaven’s Gate and in the arms of Jesus and our dad.

Tina was a loving mother to many children, including both her own and those she fostered, she was an awesome grandma as well as a wife, sister, aunt, cousin, and friend to those that crossed her path in life. Most of Tina’s life was spent taking care of people, even up to the time she needed care herself and was taken to the hospital. She really enjoyed going out to eat and visiting with family and friends, throughout her life it is fair to say she never met a stranger and was always eager to strike up a conversation with anyone.

When she was younger, Tina enjoyed reading books, camping, going to garage sales, flea markets, selling Avon, and going to the Cathedral concerts. She was a member of Shiloh Community Church, a Foster Parent for 15 years, and she also drove school bus for the MAISD for 13 years before her retirement.

Funeral services will be held on Tuesday, August 25, 2020 at the Stanton First Congregational Church beginning at 11 AM, with Pastor Jamey Nichols officiating.
Read Less

To send flowers to the family or plant a tree in memory of Christina Ellen Fike, please visit our Heartfelt Sympathies Store.

Receive notifications about information and event scheduling for Christina

We encourage you to share your most beloved memories of Christina here, so that the family and other loved ones can always see it. You can upload cherished photographs, or share your favorite stories, and can even comment on those shared by others.

Dawn, Diana Surrell, and other have sent flowers to the family of Christina Ellen Fike.
Show you care by sending flowers

Posted Aug 24, 2020 at 01:49pm
Chris and Ken were Rollie and my dear friends. Chris always had so much humor our kids always talk about it. I rode bus with her for several years such great memories. Rest in Peace Chris. Love you. Carleen and family
Comment Share
Share via:
D

Dawn purchased flowers and planted a memorial tree for the family of Christina Fike. Send Flowers

Posted Aug 22, 2020 at 08:21pm
My mom Beunna Lake was friends with Chris when I was a teen. My mom bought Avon from her. I often would babysit the children every Thursday night when Ken and Chris would go to meetings. I saw Chris and Cami last fall at the nail salon. Chris was always so happy to share a moment. We would also see each other at the high school when my daughters and Devin would sing/dance. I am sad to know she is passed. I will miss seeing her. She and mom can now celebrate their reunion in heaven. God Bless Us All. Rose Anne Lake-Paulino
Comment Share
Share via:
KD

Posted Aug 21, 2020 at 12:10pm
Christina was a very special lady who showed love and care to everyone. I first met her and her family when I worked for Dr. London. Chris was always an encouragement to us when she came in. She showed so much love to all her kids, biological, foster and adopted. In later years I would see her and we'd visit like old friends. I am so sorry for your loss but we will see her again!
Comment Share
Share via:
RG 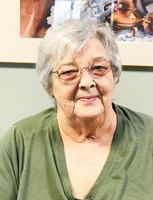