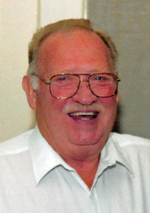 Bryce was someone who loved being outdoors, he especially liked hunting, fishing, and riding his four-wheeler. After working in the tool and die industry for 25 years, Bryce and his wife, Martha, owned and operated the Silver Lake Resort in the U.P. for nearly 20 years. While they owned the resort, Bryce could often be found sneaking off during the day to do some “P.R” work by taking someone on a fishing trip or baiting for bears. He had a tremendous sense of humor and he loved to laugh and make others around him laugh. He was a big sports fan and enjoyed watching all his favorite teams from Michigan compete. He also loved his family and enjoyed spending time with them. It didn’t matter if he was teaching his grandkids to play euchre, how to shoot a bow or going on fishing trips with them, he simply enjoyed having them around. Bryce also proudly served his country in the United States Navy and was a member of the Stanton American Legion and the Sheridan VFW.

Bryce is preceded in death by his mother, Hulda (Williams) Henry and his father, Bryce E. Clark.

A celebration of Bryce’s life is being held on Saturday, May 4, 2019 between 12 noon to 2 PM at the Simpson Family Funeral Home in Sheridan (246 S. Main Street) and you are free to come and go as your schedule allows. A luncheon honoring Bryce will be at the Sheridan VFW (209 Washington Street) at 2 PM.