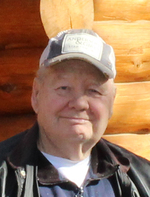 D. Bruce Herbison, age 77, of Stanton, passed away on Tuesday, April 6, 2021 at his home surrounded by his loving family after a 6-month battle with brain cancer.

Born and raised in the Stanton area, Bruce lived his entire life here, leaving only to serve his country during the Vietnam era as a member of the United States Army. After graduating from Stanton High School in 1962, he started working as a mechanic for Chapin Sales and Service and ended his working career as the Shop Foreman for the Montcalm County Road Commission, retiring from there in 1999 after 30 years of service. Motors were the passion of his life and it did not matter what kind of motor it was – he loved them all! Bruce built and drove two different drag race cars which he drove at what is now the Mid-Michigan Motorplex, even winning his class championship one year. From 1969 to 1978 he owned and operated Bruce’s Cycle Shop out of his garage, where he sold, repaired, and raced Penton and Husqvarna motorcycles and chain saws. Bruce also designed and helped to build the original Morelands Motocross track.

While Bruce was in the Army, he met the love of his life, Pat Poll and in 1968 they were married in Grand Rapids and she survives him. In addition, Bruce is survived by his daughters, Michele DeHaan and Jennifer (Jeremy) Swan, both of Stanton; his grandchildren, whom he absolutely loved, Jarod DeHaan; Faith Swan; Ashley Swan; and Bryce DeHaan; sister-in-law, Elaine Herbison of Meridian, Mississippi; uncle, Earl Krum of Stanton; many nieces, nephews, and lots of great friends.

Funeral services for Bruce will begin at 11 AM on Monday, April 12, 2021 at Trinity Church with Pastor Mark Edwards officiating. Graveside services will be held at Forest Hill Cemetery.

For those wanting to make a memorial donation in Bruce’s memory the family suggests you direct them to St. Jude’s Children’s Research Hospital. Envelopes will be available at the Church.