To share your memory on the wall of Barre Garey, sign in using one of the following options:

Provide comfort for the family of Barre Garey with a meaningful gesture of sympathy.

He was born in Jackson, Michigan, the son of Harry & Effie (Covey) Garey and they along with his son, Tadd Garey and his sister, J... Read More
Barre D. Garey, age 90 of Alma, passed away on Wednesday, February 27, 2019, at Masonic Pathways in Alma.

He was born in Jackson, Michigan, the son of Harry & Effie (Covey) Garey and they along with his son, Tadd Garey and his sister, Joyceann Meyers precede him in death.

A memorial service is being held at the Masonic Pathway Chapel in Alma on Saturday March 9, 2019 at 1:00 p.m.

For those wishing to make a memorial donation in Barre’s memory the family suggests you direct them to the First Presbyterian Church in Alma.
Read Less

Receive notifications about information and event scheduling for Barre

We encourage you to share your most beloved memories of Barre here, so that the family and other loved ones can always see it. You can upload cherished photographs, or share your favorite stories, and can even comment on those shared by others.

Plant a Tree in Memory of Barre
Plant a tree 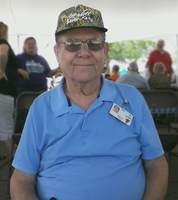